Really proud to have witnessed our patient Sarah’s new project today.  She had her second go in a ReWalk Robotic Exoskeleton and was amazing. She has really grasped the basics quickly and managed over 2000 steps.  Sarah has already learned to stop, and change direction and has been designated Star Pupil status.    ‘Bigger steps’ and ‘Faster’ comments already prove that her determination is outstanding.  Uneven ground and slopes were a little more challenging but won’t beat her.

ReWalk is a wearable robotic exoskeleton that provides powered hip and knee motion to enable individuals with spinal cord injury (SCI) to stand upright, walk, turn, and climb and descend stairs. The system allows independent, controlled walking while mimicking the natural gait pattern of the legs.  The battery-powered system features a light, wearable exoskeleton with motors at the hip and knee joints. The ReWalker controls movement using subtle changes in his/her center of gravity. A forward tilt of the upper body is sensed by the system, which initiates the first step. Repeated body shifting generates a sequence of steps which mimics a functional natural gait of the legs.

The ReWalk technology is designed for all-day use at home, at work, and in the community. It is the most used and most studied exoskeleton system of its kind via clinical studies and extensive laboratory testing. 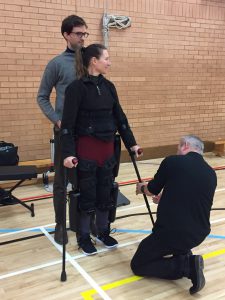 In addition to the obvious benefits that walking gives to a paraplegic patient, there are many more positive medical outcomes.  It is great for the bladder and digestive systems, as well as helping prevent osteoporosis.  A win-win all round.

We are hoping that funding will come through and that Leah will be trained up to help Sarah with her rehab to gain independence and get her out walking again – 9 years after her spinal injury. Her goal is to be able to walk up to the Avon Dam from Shipley Bridge.  I have no doubt that she will do it – and so much more.

Have a look at the Manufacturers website for more information and videos. https://goo.gl/p2JBrP